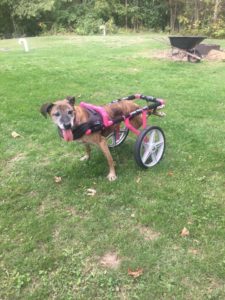 You never know where one act of animal kindness can lead. In the case of Helena, it meant changing her life from one of struggle to one of mobility. The initial kindness was in the delivery of some donated supplies to Heartland Humane Society by Centerville’s Mike Miller, who also serves on the board of Furever Friends Rescue.

“As I dropped off the food and supplies,” Mike recalls, “I saw a dog they called Helena. She was just lying there, and I asked about her.” One of the workers explained that Helena had been brought to the shelter with lame legs. They said that it was very difficult to take her outside to potty and that she often didn’t get there in time. As Mike witnessed this, he could see how demanding it was for the workers as well as for Helena as they would have to essentially hold her 80-pound body up while she walked. “They mentioned that they had a wheelchair for Helena but that it was old and didn’t fit her body properly,” shared Mike. “I felt incredibly sorry for her, and I knew I had to do something.”

Having some woodworking background, Mike set out to build a wheelchair for Helena. After looking for plans on the internet, he called the Heartland and asked for Helena’s measurements. In about one week, he had constructed a wheelchair. Anxious to see if it would work for Helena, he went to the shelter to try it out. Unfortunately, the seat harness collapsed in a couple of minutes. But Mike wasn’t discouraged. Back to the drawing board he went.

“I created a sturdier seat and painted it,” said Mike. “The next day, I took it back and tried it again with success!”

Mike adds that one of the most satisfying parts of the story is that Helena got some press in her new wheelchair, and as a result was adopted one week later! “It was one of the best things I’ve ever done,” shares Mike.  And it started with simply dropping off some food and supplies to the shelter.

Danger! These foods are hazardous to your pet’s health!